The 4th round of the British Superbike Series at Knockhill Racetrack proved a challenging weekend for Team Traction Control, with rider James Rispoli battling against adversity in the Supersport races. 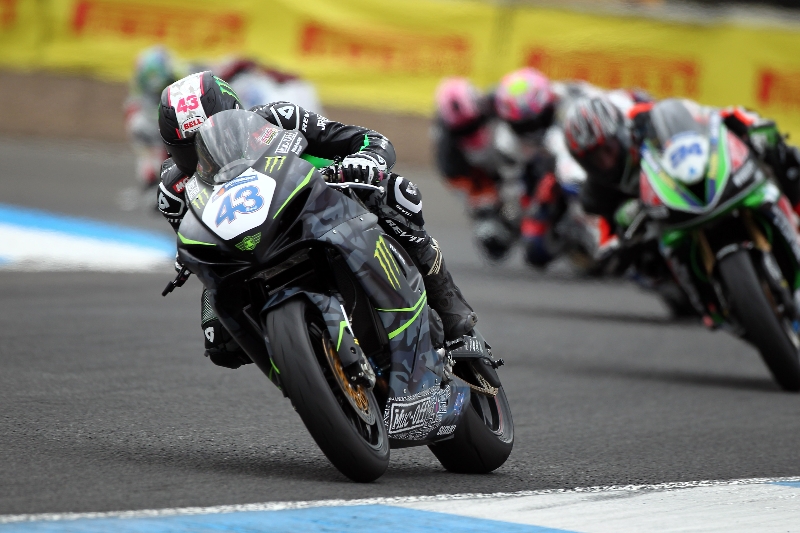 The young American, in his debut season of BSB, is racing many of the tracks for the first time this year. He’s been learning each track through qualifying and setting the bike as he goes. Knockhill was no exception and qualifying proved a tough test with James finishing in 14th place.

“After the crash at Snetterton last week we were on a brand new bike this week. We couldn’t get the front-end set quite as good as we’ve had it recently and that made it a tough quali.” says James.

Once qualification was sorted the racing got under way with the sprint. Dark clouds loomed over the circuit and it was understood that the race would be cut short. Eventually it was, but not too soon for James to again prove that positives come out of every ride he has for this new team.

“Yeah I had a great start, moving from 14th straight up to 7th and hung with the first group for several laps, but we couldn’t keep with them coming out of the corners” says James.

James finished the sprint race in 11th with quick lap times giving him a better grid position for the following day’s main race. And again Rispoli had a great start, renewing his tussle with the front-runners for the first few laps. James’s pace was there through the tight corners but he lost ground every time he needed to blast out of the corners. The result was another frustrating 11th position, leaving James knowing that he could be in the hunt at the front.

“Another great start and a chance to fight with the front group. But gutted to slip back down the order again,” says James. “However, I’m taking the positives because I’m excited that we have some big changes coming in time for the next race at Brands Hatch in a couple of weeks time.”

On reflection of the weekend, Team Principal Paul Bolwell commented. “Yes, we’ve some work to do yet, but we’re taking the positives from the weekend, we have some big changes coming for the next race at Brands Hatch in a couple of weeks time and we will continue to work around the clock on the set-up, we are all focused on getting James further up the grid, clearly he has the ability to run with the leaders and we owe it to him to provide him with a bike to do so.”