Team Traction Control head to the thrilling sweeping track of Brands Hatch this weekend for a race that is a turning point for this young team, as they unveil the Yamaha R6 they will run for the remainder of the season.

The excitement is building and the whole team will be there to enjoy watching rider James Rispoli go racing in the Motorpoint British SuperSport Championship. Team owner Keith Flint will be flying back in between some huge European festivals. The Prodigy front man is determined to be there supporting his team rider – his passion for racing as charged as always.
“This team is a huge for me. Yeah I’m travelling all over the world with the band, which is who I am and I love it. This team though, it’s a part of my life and I want to be there and be a part of it,” said Keith.
His effort and commitment are obvious as he makes a trip back from performing in Switzerland on Friday night to see qualifying and the sprint race on Saturday. On Sunday morning Keith will be at the Monster Energy stand for some signings and then it’s back on a plane to perform that evening in Germany. 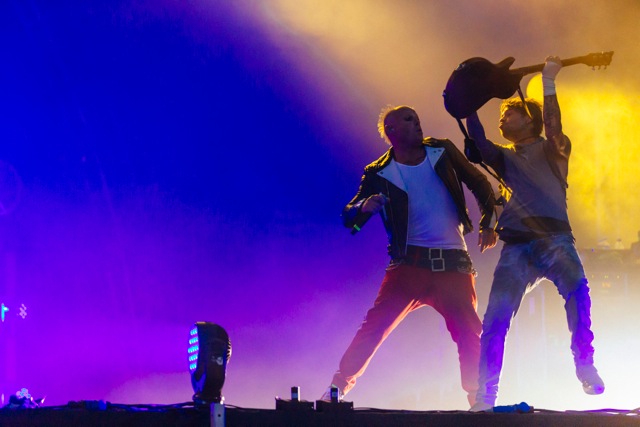 “I started this team because I wanted to go racing, that’s what it’s all about, man. We have a great rider in James who has shown a lot of commitment coming over to the UK to race with us. I can’t wait to see him rip on this new bike,” said Keith, “That is my focus – there’s no way I’m missing out. It’s everything to me.”

With his team boss flying in, a huge presence from Monster Energy and also his family arriving from the States, James Rispoli has a lot of reasons to make this race one to relish.
“The bike feels absolutely great, man! In first practice my times look competitive and I’ve really only just swung my leg over the bike. It’s very promising. With my family here and Keith flying in too, I’m really excited about the weekend,” said James.

So far through the season James has shown great promise, holding his own against the front runners in the tight and twisty parts of the race tracks. James has also had blindingly fast starts that have seen him battle in the front groups throughout the early laps. The new bike and energy behind the team might just prove to be a very effective boost in his championship position.

Team Principal Paul Bolwell said “James has been racing his butt off in every race. We can see his ability and potential and the effort he has been putting in to get 10th-ish type positions. Even though it’s our first year that just isn’t where we want him to be. We have the opportunity to get great results and that’s what our fans want too,” said Paul. “We know the bike is fast and we promised him a chance to battle for race wins.”

Thanks to @mikevanclevan for the shot of Flinty in action